Nobody Asked Me, But… No. 262: Hotel History: Tampa Bay Hotel 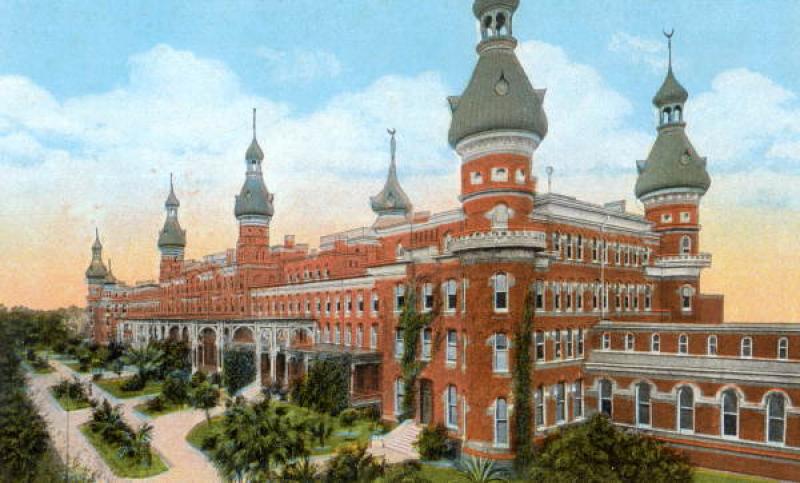 A postcard from the Tampa Bay Hotel, circa 1902. Florida Historical Society.

The success of Henry M. Flagler’s Ponce de Leon Hotel in St. Augustine convinced Henry B. Plant that Tampa needed a spectacular new hotel. With the agreement of the town council for a new bridge across the Hillsborough River and for substantial real estate tax abatement, Plant chose New York City architect John A. Wood to design a spectacular hotel. The cornerstone of the Tampa Bay Hotel was laid on July 26, 1888 and the 511-room hotel opened on February 5, 1891 with a 23-foot high rotunda supported by thirteen granite columns. Florida’s first fully electrified hotel contained the following features:

Henry Bradley Plant (October 27, 1819 – June 23, 1899), was a businessman, entrepreneur, and investor involved with many transportation interests and projects, mostly railroads, in the southeastern United States. He was founder of the Plant System of railroads and steamboats.

Born in 1819 in Branford, Connecticut, Plant entered the railroad service in 1844, serving as express messenger on the Hartford and New Haven Railroad until 1853, during which time he had entire charge of the express business of that road. He went south in 1853 and established express lines on various southern railways, and in 1861 organized the Southern Express Co., and became its president. In 1879 he purchased, with others, the Atlantic and Gulf Railroad of Georgia, and later reorganized the Savannah, Florida and Western Railroad, of which he became president. He purchased and rebuilt, in 1880, the Savannah and Charleston Railroad, now Charleston and Savannah. Not long after this he organized the Plant Investment Co., to control these railroads and advance their interests generally, and later established a steamboat line on the St. John’s river, in Florida. From 1853 until 1860 he was general superintendent of the southern division of the Adams Express Co., and in 1867 became president of the Texas Express Co. In the 1880s, most of his accumulated railroad and steamship lines were combined into the Plant System, which later became part of the Atlantic Coast Line Railroad.

In the 1896-97 season, Plant built a casino/auditorium, and 80 x 110 foot exhibition building in the Tampa Bay Hotel and a combined auditorium and swimming pool in the rear. The eastern end of the clubhouse contained two bowling alleys and shuffleboard court. When needed as an auditorium, the tiled pool filled with spring water could be covered with a wooden floor. When the hall, which seated 1,800 persons, was not used as a theater, the dressing rooms of the actors became changing rooms for the bathers. The hotel had great wide verandas, beautiful gardens, arches of electric light, oriental ceramics, beautiful statues and paintings, Turkish rugs, Chinese bronze vases. Mr. and Mrs. Plant took trips to Europe and the Far East to select and purchase furniture and other objects to furnish the public rooms.

A hotel postcard of 1924 described the beautiful grounds as follows:

A jewel so magnificent should have an appropriate setting and so it has, in a tropical garden of rare beauty of foliage and species. The acreage surrounding the hotel should match its noble proportions and so it permits of orange groves, alluring walks, and enticing drives through long lines of palmetto and under live oaks trailing their gray banners of Spanish moss.

Alongside a small stream were planted many tropical plants and fruits including roses, pansies, bamboos, oleander, papayas, mangos and pineapples. Since occasional cold weather could damage tropical plants, a glassed-in conservatory was built to grow plants and flowers for guest rooms, public areas and dining room tables. After a trip to the Bahamas, head gardener Auton Fiche returned with a boat-load of tropical plants. An 1892 catalogue of fruits, flowers and plants growing on hotel grounds listed twenty-two kinds of palm trees, three varieties of bananas, twelve varieties of orchids and various citrus trees including orange, lime, lemon, grapefruit, mandarin and tangerine.

Even today, you can see why the Tampa Bay Hotel was the jewel of Plant’s Florida Gulf Coast Hotels. Much of the original building is now used by the University of Tampa and houses the Henry B. Plant Museum. When it opened on January 31, 1891, the journalist Henry G. Parker in the Boston Saturday Evening Gazette wrote,

The new Tampa Bay Hotel: It was reserved for the sagacious and enterprising railroad and steamboat magnate, Mr. H. B. Plant, to reap the honor of erecting in tropical Florida the most attractive, most original and most beautiful hotel in the South, if not in the whole country; and it is a hotel of which the whole world need to be advised. The entire estate, including land and building, cost two millions of dollars, and the furniture and fittings a half million more. Nothing offends the eye, the effect produced is one of the astonishment and delight.

Despite all the hotel’s features, it was never a commercial success in Plant’s time. He wasn’t interested in the financial reports and claimed that the hotel was worthwhile if only to enjoy its great German pipe organ. The Henry B. Plant Museum in the Tampa Bay Hotel (established in 1933) recalls the hotel’s gilded age, when formal dress for dinner was standard and rickshaws carried guests through the hotel’s exotic gardens. The Spanish-American War Room tells the story the hotel played in the 1898 conflict between the United States and Spanish-held Cuba. Because Tampa was the city nearest to Cuba with both rail and port facilities, it was chosen as the point of embarkation for war. The hotel was designated a National Historic Landmark in 1977.

Plant’s son, Morton Freeman Plant (1852-1918), was vice president of the Plant Investment Company from 1884 to 1902 and attained distinction as a yachtsman. He was part owner of the Philadelphia baseball club in the National League, and sole owner of the New London club in the Eastern League of the younger Plant’s many gifts to hospitals and other institutions the most notable were three dormitories and the unrestricted gift of $1,000,000 to the Connecticut College for Women. Plant’s former 1905 mansion on Fifth Avenue in New York City is now the home of Cartier.